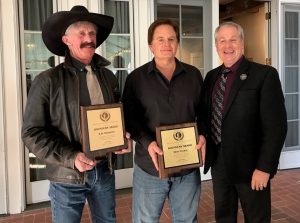 The award is named after “The Rounders,” a classic western novel written by New Mexican Max Evans. Created in 1990 by former Agriculture Secretary Frank DuBois, the purpose of the award is to honor those who live, promote and articulate the western way of life. This year’s recipients join 25 previous honorees, including Evans as the inaugural award recipient.

Agriculture Secretary Jeff Witte presented the awards to Cornay and Hampton Thursday, Oct. 24 at a ceremony at the Governor’s Residence in Santa Fe.

Witte said Cornay and Hampton truly represent the meaning behind this award.

“From the Grand Ole Opry in Nashville to the British Country Music Awards in London, RW’s music has reached many audiences the past 20 years, and we’re proud to call him a Rounders Award recipient,” said Witte. “Like RW’s music, Dino’s artwork exemplifies not only New Mexico, but the western way of life. His artwork depicts our state’s diverse agriculture and people.”

Cornay calls Folsom, New Mexico home. Inspiration for his highly detailed work lies in the heart of the ranch country where he was raised. His inspiration also comes from the people, horses and cattle that are part of his world. Western ranch life is front and center in his work. Since childhood, and with no formal training, he has documented the ranching way of life, as well as western wildlife. A great amount of attention is paid to authenticity of his subject matter. Working primarily in graphite, he works in oils as well. His art has been featured in several publications, including Western Horseman, American Quarter Horse Journal and New Mexico Stockman. Cornay has been selected to be the poster artist for the National Cattlemen’s Beef Association convention and for projects with the American Angus Association, as well as a nationwide limited edition print project with Merck Animal Health. He has commissioned an original drawing and a poster project for his alma mater, Kansas State University. He recently commissioned an original drawing for the American Hereford Association, which was auctioned and will hang permanently at the national offices in Kansas City. A nationwide limited edition print is also being offered through the association.

Growing up in a small Texas town, Hampton has drifted all across the American west, working cowboy jobs punching cattle, riding young colts, shoeing horses and even leading trail rides and guiding hunters in the high country. But perhaps his favorite activity was singing around the campfire while out with the wagon. Never glamorous, ranch work instilled in him a positive approach to life. Hampton’s rich baritone voice brings an honest quality, whether he’s performing live or on record. Hampton’s music has earned numerous honors from such prestigious organizations as The Academy of Western Artists and the Western Music Association, which inducted him into its Hall of Fame in 2011. His song “Cimarron” celebrates the land that Hampton and his wife, Lisa, live on, a place at the foot of the Sangre de Cristo Mountains in New Mexico.