As he accepted the prestigious Chester A Reynolds Memorial Award during the 60th Annual Western Heritage Awards on Saturday, September 18, 2021,

Actor and Western Singer RW Hampton told the audience that the best moments of being a cowboy are when being alone – “just myself, a good horse and God Almighty.”

RW then led the black-tie crowd of more than 1,200 through the gospel standard, “How Great Thou Art.”

In the audience were Country Superstar Reba McEntire, actor Rex Linn, several members of John Wayne‘s family as well as Country Superstar George Strait and Academy Award Winner Robert Duvall (both were on hand to accept Lifetime Achievement Awards from the organization).

“Back then, to me, being a cowboy was as good as it gets!” says RW, who accepted the award, among the highest honors presented during the annual event and given to those who exemplify the ideals of individualism, honesty, humility and integrity that are closely identified with the American West. The award recognizes individuals or groups who have demonstrated unwavering commitment to Western ideals and values.

“I’ve never wanted to be anything other than who I am,” RW says. “I’m so very proud to be honored by the folks in this industry that I respect so much and to be surrounded by family and friends!”

Called “Today’s Voice of the American Cowboy,” RW began his career playing guitar and singing at cowboy campfires as a wrangler at Philmont Scout Ranch. Prior to his career in the entertainment industry, he drifted across the American West, working cowboy jobs on some of the biggest ranches in the West, punching cattle, riding young colts, shoeing horses and guiding trail rides and hunters in the high country.

In addition to the recent Chester A Reynolds Award, Hampton has been honored by such prestigious organizations as The Academy of Western Artists and the Western Music Association, which inducted him into their Hall of Fame in 2011.

As an actor, RW will appear in the upcoming Netflix film Peace River and the “edge-of-yer-seat” docu–drama The Contested Plains. Both films will be released in 2022. His acting resume also includes “Wild Horses“ and ‘The Gambler III’ (both with Kenny Rogers), and HBO’s “The Tracker” starring Kris Kristofferson among others, and television specials “Kenny Rogers & The American Cowboy,” and “Dead Or Alive.”

RW will release his latest Western Americana album, My Country, later this year.

The Western Heritage Awards are presented annually by the National Cowboy & Western Heritage Museum in Oklahoma City, OK. Top honors are given for Best Western Music, Film, Television and Literature. Recipients are given a bronze sculpture of a cowboy on horseback, designed by artist Harold T Holden.

In the early 1950s, Chester A Reynolds, a Kansas City, Missouri, native and entrepreneur who was once the President of Lee Jeans, became concerned about what he considered the nation’s loss of Western heritage. So he began a campaign to create an institution that would honor the men and women who settled the American West. He later founded the National Cowboy & Western Heritage Museum.

The Western Heritage Awards were first presented in 1961. 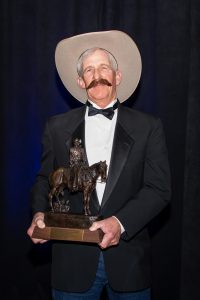