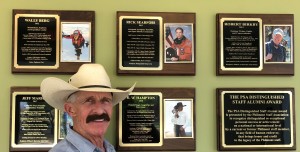 RW was recently named the 2018 recipient of the Philmont Staff Association’s Distinguished Staff Alumni Award. He was given the award and served as the keynote speaker at the opening assembly for Philmont’s 1100 seasonal staff members on the evening of May 29 at Philmont.