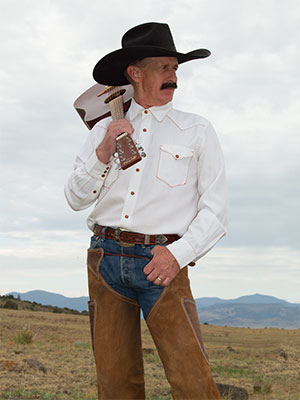 R.W. Hampton is one of the leading Western Entertainers in America today. His fans come from all walks of life. He’s loved by cowboys, cowgirls, ranch hands and rodeo stars, but also by people who have never seen a cow up close – or care to. R.W. is known for his patriotism, his family values and Christian beliefs. His voice & songs resonate with audiences worldwide. He is today’s voice of Cowboy Music.

Blessed with a wonderfully rich baritone voice, R.W. has a quality of genuineness about him that resonates when he’s on stage, in person or just through the words of his songs. For R.W. has lived what he sings about, and the world of early mornings, hard work, rough horses, maverick cattle and new ranges fits him. After twenty-two years in the entertainment business, R.W. is still pure cowboy, singing about what he loves best. Working cowboys in today’s world are unique on their own, but being genuine in a day when even reality television programs are set-up and staged is even more refreshing, and R.W.’s audiences and fans appreciate that.

R.W. was born to be a cowboy. Although he grew up in a Texas town, he has lived and worked on ranches all over the American West. His start came with a summer wrangling job at Philmont Scout Ranch in the mountains of Cimarron, New Mexico. The work felt good. Whether driving cows, shoeing horses, singing around the campfire, or leading horse rides in the high country, R.W. knew it was the life he was destined for.

He worked at Philmont for three years and then took a riding job at the Red River Ranch near Springer, New Mexico the summer after high school. His parents were anxious for him to get a college education, which he tried, but soon found he was more interested in riding a horse and playing his guitar than attending class. Consequently, he left school, loaded his saddle and headed for the Spade Ranch in New Mexico.

Like a lot of young cowboys, R.W. got the urge to see new ranges after a few years. From the Spade Ranch he went to the IL Ranch of northern Nevada and then back to New Mexico and Texas to the 4T and K Cross Ranches, the Quien Sabe and the LS Ranches, where he started colts along with taking his place among the cowboy crew. Although he relished life on the Canadian River ranches, he still had the urge to drift which sent him to the ZX Ranch of the Oregon desert and then to the Pickerel Land and Cattle Company of Wyoming.

All the while R.W. played guitar and sang cowboy and western songs, an interest he had pursued since high school. On the ranches where he worked he wrote songs based on his experiences. Most of the time he played and sang to entertain in bunkhouses and at roundup wagons; but periodically he was invited to sing in public. As time drew on, R.W. received more invitations, many of which paid considerably more than cowboy wages.

As a result, R.W. came to a point where he had to make a decision. The demands of performing while holding a ranch job were much too difficult. In 1988 he decided to see if he could make a living playing music. The decision was monumental because he went from a ranch job, earning $800 a month with a house and beef, to an uncertain attempt to make a living in a new career. Invitations came sporadically at first, but eventually grew to include performances at rodeos, cowboy poetry gatherings, performing arts centers, churches, corporate events, and private functions.

In 1985 R.W. added to his resume when he worked in Kenny Rogers’ movie Wild Horses. The role was a treat for him as it gave him opportunity to sing and play his guitar in the film and to work with Ben Johnson, Richard Farnsworth, and Buck Taylor. He has appeared in twelve movies since, including The Tracker with Kris Kristofferson and two other Kenny Rogers films, The Gambler III and a documentary of the American cowboy.

Along the way R.W. has performed all over the United States including The Grand Ole Opry in Nashville and in Washington, D.C. at The Smithsonian Institute. He was a special guest at the 2010 British Country Music Awards in London, and has also appeared at cowboy events in Australia and Brazil. 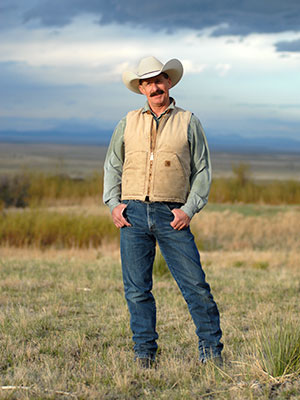 His peers in the Western entertainment industry have honored R.W.’s performing and songwriting fifteen times, perhaps most notably in November, 2011, when he was inducted into the Western Music Association’s Hall of Fame. R.W. received the first of his industry accolades in 1996, when the Academy of Western Artists presented him with their first Will Rogers Awards, naming him both Male Vocalist of the Year and Entertainer of the Year. Twelve months later, his album, Ridin’ the Dreamland Range, won recognition as the group’s Album of the Year. The Academy named R.W. its Male Vocalist of the Year again in 1999, 2002 and 2006. The membership of the Western Music Association voted him Top Male Performer for 2004 and 2010 and his composition, “For the Freedom” (from his Western gospel album, I Believe), 2006 WMA Song of the Year. In September, 2009, R.W. received a Lifetime Achievement Award from the Association of Cowboy Culture. Early in 2011 R.W. received a Wrangler Award (his third) from the National Cowboy Museum and Western Heritage Center in the “Outstanding Original Western Composition” category for his song, “Shortgrass”, from his most recent album release, Austin To Boston.

One of R.W.’s most creative efforts is the one-man stage play, The Last Cowboy, written with his brother, Jeff, and playwright Dave Marquis in 1993. Set in the year 2025, R.W. plays an aging cowboy who recounts the history of the American cowboy through monologue and song. The show has received high praise not only for R.W.’s performance, but for his insightful interpretation of the cowboy past as well. In addition, his album, The Last Cowboy – His Journey, which was inspired by the play, received a Director’s Choice Wrangler Award in 2000 from the National Cowboy Museum and Western Heritage Center for “Excellence in Dramatic Presentation and Original Music Composition.”

R.W. has thirteen albums to his credit over the past 20 years, including two gospel CDs and a Christmas record, plus his Austin To Boston (released in October, 2010), which has received notable success in the United States, listed as the Number One most played Western Album for 2011, and in the United Kingdom where 3 of the songs charted in the Top 10 of the Hot Disc Country Charts in 2010 and the single, Driftin’ Again, topped Britain’s Hot Disc Country chart for eight weeks in late 2010 and by virtue of that performance was named the European chart’s Most Popular Song of the Year.

Hampton’s success with Austin to Boston followed his previous release, R.W. Hampton Presents: Oklahoma … Where the West Remains (released in November, 2007). Recorded with the Enid Symphony Orchestra (Enid, Oklahoma) to commemorate the centennial of Oklahoma’s statehood, Where The West Remains was named “Outstanding Traditional Western Album of the Year” by the National Cowboy Museum and Western Heritage Center in April, 2008 (R.W.’s second Wrangler Award), and Traditional Album of the Year by the Western Music Association in November, 2008.

Today R.W. lives with his wife and their two youngest children on their Clearview Ranch at the foot of the Sangre de Cristo Mountains south of Cimarron, New Mexico. When he’s not headlining cowboy concerts and western music events across the nation, R.W. spends most of his time at the ranch doing the work he loves. His life is guided by his faith, his love for his family, and his desire to share cowboy life with his audiences.